Happy New Pope Day, eh? After a Popeless fortnight during which the Vatican got struck by lightning and a kid got cured of HIV- yes, I know that correlation and causation are not the same thing. But you can’t say there isn’t a certain poetic justice to what happened after Benedict’s resignation.

The first thing I heard about the new guy was that he’s a Jesuit, he’s calling himself Francis, he lives a simple lifestyle and even takes the bus to work and lives in an apartment. He’s the first non-European pope in over a millenium, the only Southerner to ever get the job, and he’s vocally opposed to extreme poverty. Unlike the last guy, a quick scan of his Wiki page doesn’t detail allegations of covering up numerous cases of child abuse. After the Papacy of a man described (among other things) as the high priest of fashion, this didn’t seem half bad. My Nan, a devout Catholic and lifelong fan of St Francis, would’ve loved him. I can see the appeal.

But then you look a little deeper. Let’s start with my pet topics: abortions and queers.

Are we all to be homophobic misogynists now, Father?

Much has been made of the fact that Francis believes that homosexual people (as they delightfully refer to us) should be treated with respect. This, however, ignores the fact he is more or less obligated to do so. The Catechism of the Catholic Church (a rip-roaring read if ever I saw one) acknowledges that there are many people with homosexual tendencies. Their official line is one of hating the sin and loving the sinner:

The number of men and women who have deep-seated homosexual tendencies is not negligible. This inclination, which is objectively disordered, constitutes for most of them a trial. They must be accepted with respect, compassion, and sensitivity. Every sign of unjust discrimination in their regard should be avoided. These persons are called to fulfill God’s will in their lives and, if they are Christians, to unite to the sacrifice of the Lord’s Cross the difficulties they may encounter from their condition.

There’s nothing special about Francis’s assertion that the homos shouldn’t be actively hunted down. He’s only following the party line. And when it comes to actually having respect for queer folks and our relationships, he goes right back to that Catechism for a line to follow to the very letter:

Basing itself on Sacred Scripture, which presents homosexual acts as acts of grave depravity,141 tradition has always declared that “homosexual acts are intrinsically disordered.”142 They are contrary to the natural law. They close the sexual act to the gift of life. They do not proceed from a genuine affective and sexual complementarity. Under no circumstances can they be approved.

Surprised? Here’s what he had to say about the introduction of equal marriage in Argentina in 2010:

Francis is okay with LGBTQ people existing. If we dare to love each other, though, we become little more than tools of Satan himself. Strong words, eh? You ain’t seen nothing yet:

At stake is the identity and survival of the family: father, mother and children. At stake are the lives of many children who will be discriminated against in advance, and deprived of their human development given by a father and a mother and willed by God. At stake is the total rejection of God’s law engraved in our hearts.

You’d think that someone as intelligent as Francis, working in an organisation like the Catholic Church, would steer clear of, say, describing kids being raised by two loving parents of the same gender as child abuse. One would think that someone in his position would be painfully aware of precisely what does constitute child abuse. That he might not want to bring up the topic when he doesn’t have to, maybe. Obviously not.

And, of course, he’s that special kind of anti-choicer who figures that people who are raped should be forced to give birth, and that anyone who disagrees with this should be denied communion. Charming.

All of this, however, is well within Catholic doctrine and precisely what we should expect. Being a homophobic misogynist is a requirement for the job. However, there are questions over the head of Pope Francis that go far, far deeper than the disregard for women and queers that we’ve come to know and love. How do you feel about dictatorships?

I’m no expert on Argentinian politics and history. I barely manage keep up with things going on around here, never mind a country of, er, about ten times the population of Ireland that happens to be a bit far away. Even I, however, know that Argentina’s had a bit of a problem with military dictatorships and state terrorism in the recent past. The TL;DR of it is that the 1970s weren’t a great place to be a person with an opinion inconvenient to the regime in Argentina. The bright side of that, of course, was that if you were a person with an opinion inconvenient to the regime, you wouldn’t have to worry about things like rent and electricity bills for very long. What I’m getting at, by the way, is abductions, torture and concentration camps.

Pope Francis, though, is a man so sensitive to the value of human life that he extends it to fetuses and people with painful, terminal illnesses begging for their suffering to end. He’s bound to have come out all guns blazing against a dictatorship willing to kill people even after they’ve been born, right? Right?

It turns out that Pope Benedict isn’t the only recent Holy Father to have a somewhat dodgy history when it comes to fascism.

Remember the way that Francis would deny communion to pro-choicers and euthanasia advocates? What do you think his attitude would be, then, to a man who took responsibility for the kidnapping, torture and murder in concentration camps of tens of thousands of his political opponents? Not to mention taking newborn babies from their mothers at these concentration camps. Surely a man so concerned with protecting the family from the threat of same-sex couples would not have been able to remain silent? 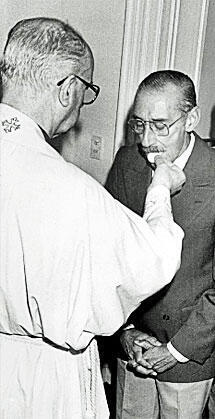 Francis didn’t just remain silent- he actively collaborated with the regime. What do you think of hiding political prisoners from the visiting delagation Inter-American Human Rights Commission in his own summer house? (The Guardian has since retracted this claim- see comments below). How about removing religious licences from two members of his own Jesuit order, just before they were kidnapped by the regime? Convenient, eh? Remember what I mentioned above about newborn babies being stolen from their captive mothers. What would you think of a man who remained silent when he found out the details of the important family that one of these stolen babies was given to?

But hey. He lives in an apartment. He takes the bus to work. He sometimes hangs out with poor people, and once he washed the feet of people living with AIDS. And these days, he speaks out against the abuses that he collaborated with all the time. That makes it all okay. Right?