So, Matt Smith is leaving Doctor Who. Soz for the spoiler- I know it’s the kind of thing that it’s almost imposible to hear about on the internet.
I have to say that I’m not tremendously bothered. Smith/Moffat era Who never grabbed me the way that Russell T Davies, Nine and Ten did. It’s not just Moffat’s well-known fail-y ways when it comes to characters that aren’t straight white dudes- although after the RTD years, that was a bit on the unpleasant side. There was just something about the Eleven era that failed to grab me. Some depth, flair or humanity missing from the characters. One of the things I loved about RTD’s companions was how grounded they were (aside from Captain Jack, natch. But that man is a bit of a deliberate enigma, isn’t he?). They had real lives- boyfriends, mothers, sisters, doting granddads, ordinary jobs- and the Doctor was just another part of those lives. They felt.. plausible, in a fantastic universe. They weren’t Manic Pixie Dream Companions. They were people.

But that was then, and this is now, right? Onwards and upwards, allons-y and all that, and we’re all a mite interested to know who’s going to be next. In this corner of the internet, we’re all simultaneously crossing our fingers for a Doctor that may not be yet another white dude (nothing against white guys, like, but you lot have been hogging being the Doctor for decades. It’s time you let the rest of the world have a go, k?), and shuddering at the thought of what Moffat would do to ’em, given his track record with everyone who isn’t part of his favourite minority.

In the middle of the speculation comes Russell T Davies. And what did the man who gave us Captain Jack and Donna have to say?

Russell T Davies explained to the publication how this mega change would never be allowed because it is “a family show”, adding:

“That’s because they will then imagine they will have to describe sex changes to their children.”

Before I go on, and as a bit of an aside- does anyone think it’s (not) funny that it’s apparently okay to cast Benedict “So White He’s Practically A Daz Ad” Cumberbatch as Khan Noonien Singh, but that changing the gender of a non-human alien with a well-documented ability to transform themselves into a whole new body would be going too far? If I were less unrealistically optimistic about humanity, I’d say that we were dealing with a one-way valve leading to straight white dude-hood.

Let’s get back to RTD and the Lady Doctor, though. In a fantastic reversal of the good ol’ Argumentum Ad Won’t Someone Think Of The Children, Davies is pleading with us to Think Of The Fathers. If the Doctor regenerates into a Lady Doctor, the fathers (but not the mothers?) of the nations will have to explain to their kids that real-live people sometimes transition to different genders. As a society, I guess that we’re just not ready for that. Right?

Maybe. But… maybe not. Let’s make a list, shall we?

A Lady Doctor Would Not Be The End Of The World: In Three Parts.

Part the First: It Really Wouldn’t.

The Doctor is an alien. An immortal alien with two hearts, a telepathic time machine that is both infinite and the size of a phone box, a widget that will fix anything, and the ability to regenerate into a new body (and personality) every time his current body looks like it’s about to give up the ghost. The Doctor does tons of things that you or I can’t do. He’s just a little bit magic. When people die, we don’t get dramatic and glow-ey and turn into Matt Smith as our spaceship crashes to the ground to rousing orchestral music. If fathers are so disturbed at the idea of telling their kids that sometimes people change gender, all they have to do is wave their hands and say that it’s just another one of those wibbly-wobbly doctorey-woctorey things. By which time something exciting will have happened involving aliens and saving humanity and they’ll be distracted anyway. Easy.

Part the Second: It’s Not That Difficult

“But Daddy, Daddy! The Doctor turned into a lady! Can people do that too?”
“Yep. There’s less in the way of glowing TARDIS energy involved, though. Also: fewer violins.”
“Cool! Does that mean we can have sonic screwdrivers and TARDISes too?”
“Nope, unless you invent one when you grow up”
“I WILL BE A SONIC SCREWDRIVER INVENTOR WHEN I GROW UP”
“Excellent”

And then the kid grew up to invent a sonic screwdriver, and the father won at parenting.

Part the Third: It’s Been Done Before.

I wonder if you’ve ever heard something like the following:

“I’m fine with xyz, but society isn’t ready for it”

The speaker is cool with you, you see. They’re open-minded, accepting and desperately intelligent. Far more clever than the unwashed masses out there. Those masses, on the other hand? Are just not able to deal with whatever it is you are. We don’t want to tax their little prole minds too much. Best to wait an indeterminate amount of years until society grows up and magically, without exposure to difference, becomes cool with the rest of us.

Of course, that falls apart when you realise that a major sci fi series did just that twenty years ago, with a main character who was centuries old, who had regenerated many times into different bodies and personalities, who had friendships that continued from one life to the next, and who- yes- had been different genders many times. I’m referring, of course, to Deep Space Nine’s Dax.

If you haven’t seen DS9, you should obtain all 7 seasons by whatever method you do such things yourself, clear out your diary for the next few weeks, and watch it now. In the meantime, a little background on Dax. Dax- or Jadzia Dax, as she is when we meet her- is a joined Trill. Trills are a species who, in their joined state (most Trills aren’t joined) are composed of two parts- a humanoid host who lives and dies like other humanoids, and a wormlike symbiont who can live for many centuries and who holds and preserves the memories of its hosts. When a host dies, the symbiont is transferred into a new host to begin another life. A joined Trill individual is therefore a blend of the current host, their symbiont, and all of their past lives. Trippy, eh?

Where the Doctor rarely refers to the past, Dax doesn’t have that luxury. Jazdia Dax lives and works among people who knew her when she was an old man. Her boss, closest friend, mentor and mentee (life is complicated when you’re a twentysomething with a centuries old mind) calls her “Old Man” and reminisces about old times. She encounters people of many species who she knew in past lives, deftly negotiating complex terrains of age and gender, owning both who she is and all of the other people that she was. She’s also, by the way, a badass science officer, wicked smart, and manages to gamble with the Ferengi and win. The Doctor ain’t got nothin’ on Dax (although, dear sweet FSM she would make an incredible Companion. Although I suspect it wouldn’t be long before it’d be the other way around). 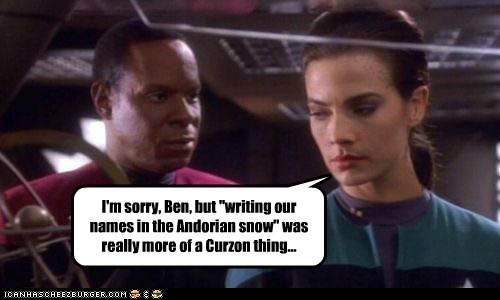 When Russell T Davies says that fathers wouldn’t be able to deal with telling their kids that girls can be boys and boys can be girls, he betrays his own transphobia, not theirs. When he implies that society just isn’t ready for a female doctor, he betrays his own classist elitism. And when he narrows the scope of shape-shifting science fiction aliens to just another guy in a (delightfully dapper) suit, he betrays the very point of storytelling and imagination. If in this fantastic playground of space, time, changes and identity we can’t recreate our ideas of who we are, then where can we?