I’m off visiting my family for a couple of days, so I’ve asked the lovely Maki Yamazaki (whom you may have heard of described once or twice.. or three or four times.. as the Ladyfriend) if she wouldn’t mind taking over for a day or two. Enjoy- and remember, Maki’s a guest here, so be good while I’m gone, y’hear? -Aoife

You stare at your workspace and it’s like there’s nothing there but an empty abyss of art materials and space where your masterpiece should be. You felt good when you woke up -refreshed and ready to make something come to life – but now you’re full of doubt. Everything you make seems to come out wrong and you can’t concentrate. Your head is full of dreams and ideas but, for some reason, they wont fall out of your head without creating something resembling an aborted fetus.

You get up, make yourself a coffee/tea, check your emails and social media and, after a couple of meaningless hours the void is still there and you decide to tackle it again. Thirty minutes later you give up, with nothing to show.

Welcome to Artists’ Hell. My name is Maki Yamazaki and I’m here to help. I can show you the way out, but, I’m afraid, you’re going to have to do the hard work it takes to get out. But heed this advice and you too can escape Artists’ Hell and become an art ninja.

Firstly, stop yourself and take a long, measured look at why you’re doing this. If you’re anything like me, you probably can’t help it. It’s like this compulsion. When I see beautiful art, all these ideas explode in my mind. When I see people sketching my fingers twitch. Sound familiar, perhaps?

I’m going to stop you again right there and ask you, in all seriousness, where you intend to take these ideas? Do you want to hold down a full-time job and do it for fun or do you want to make it into a career?

No, no, I didn’t ask you if you thought you were good enough! Forget that for a second and ask yourself where you want to take it. Next ask yourself what you’re willing to do in order to achieve that.

I’ve known many who’ve had a great time drawing, writing, painting or whatever for fun and it seems the moment they decide to take it seriously they lose the motivation and can’t seem to produce any work.

Ask yourself how much effort you’re really willing to put into your work and if it’s worth all the pain and hard effort in taking it all the way into a full-blown career. If not, stop pretending that it will happen if you go into it half-arsed. Which leads me to my next point…

Go Into It Half-Arsed

One of the biggest killers of creativity is being too serious, I shit you not.

Everyone has a shedload of bad art in them. I still have hundreds of abominations to create and I look forward to making them gleefully. That’s right, with full-blown mirthfulness.

The key thing to realise is that you willll always have bad art days. Always. If you think for a second that you’ll reach a point where you’re happy with everything you create, I’m afraid you’re sorely mistaken.

If you want to be serious about what you, then be prepared to not take it too seriously. If you make something that you wouldn’t kiss your mother with, where, I ask you, is the problem?

Truth is, you need these horrors. You need them like Data needs his humanity. Your flaws are exactly what makes your art better. So lighten up- Why so serious?

Learn To Trust Yourself

So, you’ve doomed yourself to a life of creating art because you thought you could do this, but now you feel like a failure. But you chose this path, did you not? Don’t back out now. It’s time to start reminding yourself of how you got into this mess in the first place.

In short, I advise you to quit whining and moaning. So you’ll never be as good as Michelangelo, Da Vinci, Donatello or Raphael. You may never be as inventive as Picasso or as nimble as Steve Vai.

So what? Who wants to be dead anyway? This isn’t about them, it’s about you.

If you practice your art, you WILL get better, simple as. Stop telling yourself you’re crap and start making shit. You may not get to where you want to be but remember: It’s not about where you’re trying to get to, it’s how you get there.

Humans seem to have this annate ability to, as soon as they have something they want, they get bored. Once you learn to draw faces you’ll want to draw them better. When this happens, congratulations! Take a moment to appreciate how far you’ve come. Don’t be so hard on yourself and remember, you’re coming into your own element. There’s no magic spell to instantly make you the queen of ink or the god of crochet. You have to do the work to get better, so don’t expect to be the big man without putting a lot of sweat and fun into it.

That’s right, I said fun. Have some fun, now. It’s easy to feel like things are a chore when you have a goal you’re trying to reach. You’ll find when you open your mind a bit more, relax and get playful, you’ll realise all kinds of wonderful things are possible. Try doing things differently. Like any evil good scientist, you’ll find that if you experiment you will get results. They may not be the results you were expecting, but they’ll be results none the less!

Think outside the box and get playful. Try different materials, mix media, do it upside down, and see what happens when you toss the rulebook out the window. Don’t Paint By Numbers and don’t do it missionary-style because everyone else seems to be doing it that way.

Making art is a very intimate thing and remember- it’s all about you.

I cannot stress how important it is to stop being precious about every single thing you make and to start learning to do things wrong. Because eventually, you’ll get it right and it will be Epic.

Children are so much better at being creative because they’re not carrying the weight of the world around with them when they make stuff. So be like the child and start having fun.

I Have Scribbles, Now What?

This is where your experimentation goes on hold and the critical side of you comes out. Not forever, mind you, just long enough to appreciate the excellent mess you’ve made. This is where you sift through all the crap and find the hidden gems. Did you play a riff that was totally off the wall whilst pissing about? Perhaps you found that painting with sticks whilst suspended from the ceiling was a surprisingly good idea. Maybe when you lopped the arms off the sculpture you’ve been working on laboriously for months paid off. Whatever you did, you have to do it again.

And then again. But slightly different.

Repeat Ad. Nauseum- it will turn your copper into 24k gold.

Paint By Numbers, Then Steal

This is a wonderful technique for becoming awesome at precisely the thing you want to become good at but, sadly, it’s one of the hardest things to do! It’s easy to think that you’ve got this whole thing sussed out by working from only whats in your mind, but you still feel like you’re getting nowhere.

Learn from the best by copying their work. You’d be surprised by how much you can learn from copying the work of artists that you love! True, your copy will probably never be as good as the original, but, that’s not the point. The key is that after you’ve learned to copy the best, you can take your newfound knowledge and apply it to your own work.

It’s the not art that you want to steal but the method behind the art. Most artists call this ‘influence’, but don’t realise it. It’s a powerful tool so use it to your advantage.

Level Up By Grinding

I think we’re probably all guilty of creating something beautiful. You create something so beautiful, in fact, that it seems that everything else you create is horrendous in comparison. It’s like beating the end-of-stage boss only to find that everything creature on the next level completely kicks your ass. That’s probably because you forgot to level up. You probably also only beat that last boss within an inch of your own life. You got lucky.

This is why we sometimes have to level-grind, as gamers, and it is exactly the reason why you should level-grind as an artist.

For the non-gamer, that analogy probably went completely over your head, and I apologise. In essence, there’s no point in creating a great piece of art if you can’t replicate the results.

Yes, I know repeating the same thing over and over and over again is tedious, but you will be much better off for it, trust me. I did say there was hard work involved, correct?

When I groan at the thought of drawing the same character 20 times in a row in identical poses and the thought fills me with The Fear, I tell myself to stop being so negative. Instead, I try to view it not as a boring task, but a challenge. And even if it might be boring, I will have got much better at the end of it. Hell, that beautiful pose will forever be etched into my muscle-memory forever, only to erupt onto canvas at the slightest whim.

Simply as, when you learn to do something the way you like it, learn how to do it again and again or you’ll be cursed to forever have to live in the shadow of that image. 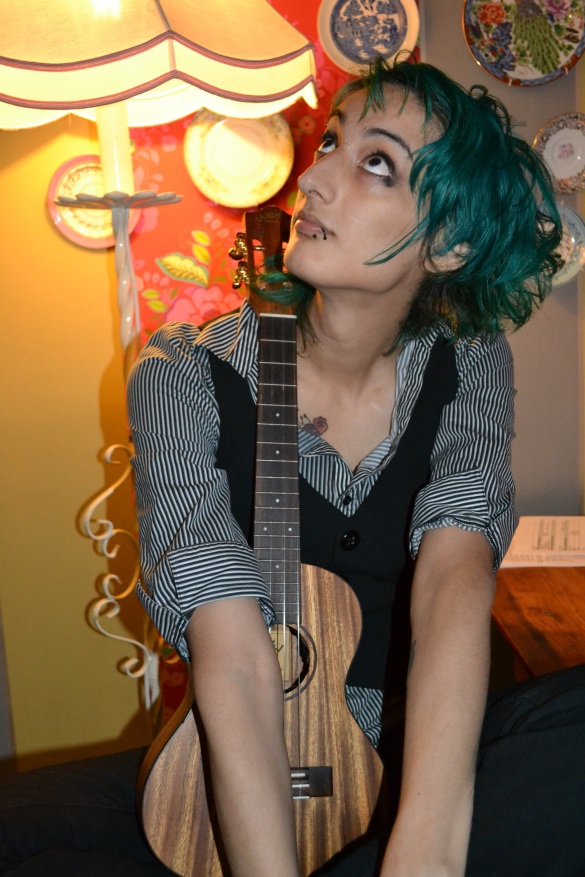 For more from Maki, check out her musical alter-ego, lesbian vampire in space Dr Carmilla. She’s on hiatus at the mo while the new studio’s being, er, built, but you can listen to her archives here. It’s rather good, if I do say so myself. -Aoife

I’m not normally one for major plugging- have far too ingrained a sense of post-Catholic guilt for that sort of carry-on. However, here’s something I would really, really like to share with you all. Now, you might say that I’m biased about this one. You’d be right, of course. But I didn’t start off biased, and if the lovely Maki Yamazaki managed to sweep me offmy feet with her lovely ukuleleing (among other things) then I see no reason why you all won’t love what she does too.

Which is an awfully drawn-out way of saying that my girlfriend is making a ukulele album. She’ll be playing Nottinghamshire Pride in a few weeks, and would love to have it done by then, but these things ain’t free and she’ll need some help.

Now, I know that not all of you are swimming in oceans of delicious spare money to be throwing at every gorgeous, talented queer musician with an album to make. And that’s fine! But do check out the video and the funding campaign. And if you have a few eurodollarpounds to throw her way, that would be amazing. Or if you’ve a tumblr or a facebook or a twitter lying about, sharing is wonderful too. And if you’re anywhere near Nottinghamshire for Pride, you should absolutely check ‘er out.

Her funding campaign is here. Enjoy!