Check out what lovely tweets they sent me!

It’s almost like they’re proud of having nothing but US money to bring to the conversation. Baffling.

There’s nothing I’d rather be doing on the weekend after a massive pro-choice meeting and ginormous anti-choice demo than bashing out a great big post on all of my (extensive) opinions on the matter. However, Real Life has intervened and I’m down in Cork visiting family, learning to drive bikes and being distracted by my folks’ adorable new dog. It turns out that many of the country’s must-read bloggers have been hard at work at their keyboards while I was working off my anti-choicer induced stress on roller skates. Here’s a few to get you started:

The ‘Vigil’ for Life’s organisers (by the way, I’ve never experienced a noisier vigil in my life. Seemed more like a great big rally than a nice quiet vigil to me. Especially with the massive sound systems they brought in) claim that they had ~30,000 people. Since they were the ones that bussed them in, you’d think that they’d have decent idea of how many there were. Derek Walsh, though, had this to point out:

3,701 in one picture. Is there really 25,000 in the other? twitter.com/Oireachtas_RX/…twitter.com/IrelandStandUp…#vigil4life#wallies

The two pics he linked to? Here: 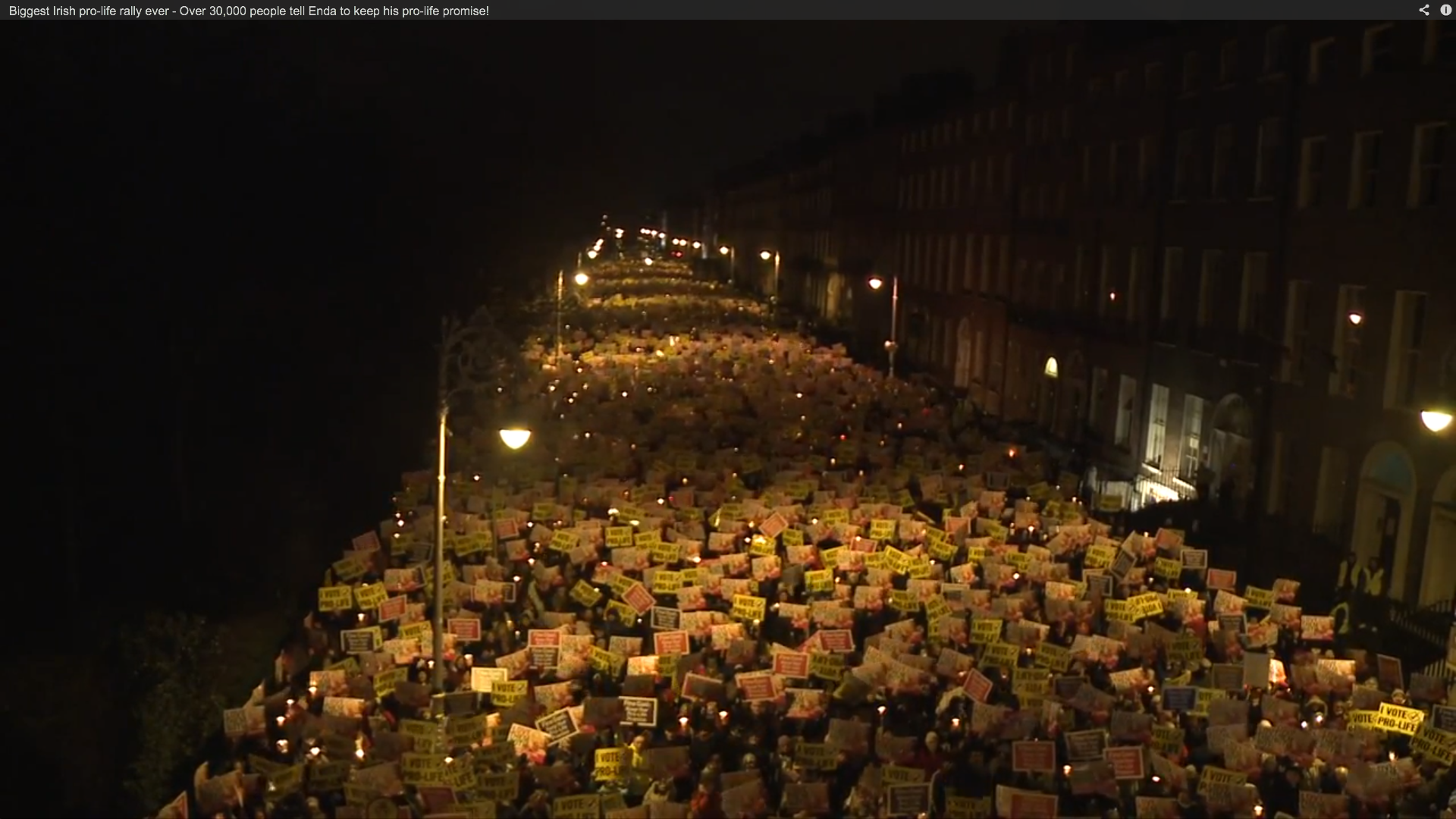 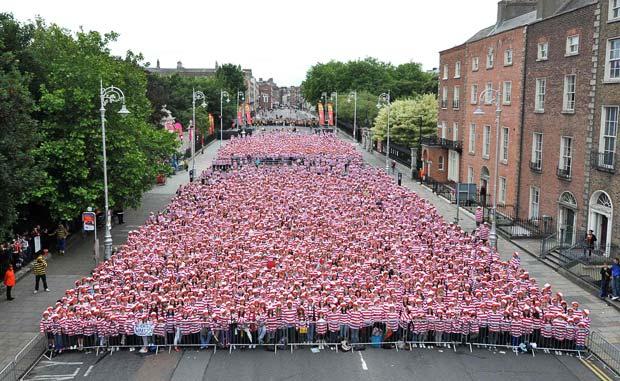 That second pic, by the way, is from a Guinness world record attempt at getting the most number of people dressed as Wally/Waldo in one place. So those numbers? Verified. And while there do look to be more people in the top picture, I’d be immensely surprised if it was an actual order of magnitude more.

However, I don’t have to be! Broadsheet.ie, Oireachtas Retort and the WSM have all been hard at work counting lampposts and plugging areas into apps, and have come up with a number of about 14k. Which is a lot of people. But nowhere near the 25-30k that the ‘Vigil’ for Life claim.

Elsewhere in the rich and colourful land of what passes in certain camps for ‘facts’, Edinburgh Eye had something to say about ‘prolife bollocks’, taking a look at the leaflets distributed on Saturday:

“An Abortion Truth. A six-month-old aborted baby had his testicles transplanted into a 28-year-old Lebanese man who had been unable to become fully sexually active. The surgery was successful, the donor baby was killed.

If a man has been “unable to become fully sexually active”, no doctor in the world would recommend a testicle transplant.

Good to know. Although what use a pair of fetal testicles would be to a fully grown man, I have no idea.

Moving extremely swiftly on to the clear waters of evidence and facts, here’s Geoff’s Shorts bringing some statistics to the theory that Irish Catholics are all anti-choice:

Of all the people I spoke to that day the one who’s been most in my thoughts is Brigid.

It’s not her real name. I recall our longest conversation: she took me aside and with near painful shyness said she’d rather not have her picture taken, “in case people back home found out”. Before that I’d offered her a newspaper. She seemed to have arrived alone and made quickly for the rear row of seats. I read her as nervous; a woman of my parent’s generation in a room that at the time leaned heavily towards those in their twenties. She seemed determined to do something but worried of ramifications. We’d been briefed of potential anti abortion disruptions.

She sat quietly through the initial presentation. Then came questions and answers, with her hesitantly raising her hand and then thinking the better of it. A few questions from others saw her resolve returned and she asked for the microphone. Finding her voice she told us she is a mass-going Catholic, how she is pro choice, and how hard it can be for her believing abortion to be a matter of personal conscience in a setting so hostile to the expression of such views. The Irish Pro Choice movement does not do free buses;  Brigid had travelled considerable distance at her own expense to be able to freely state her position.

Thank you, Brigid. In light of her story, this next link seems appropriate: Red Wine & Brie writing about abortion and how Ireland forgot it was a democracy:

[in 1992] the people voted but it appeared the government didn’t care. One of the main tasks of any country’s government (particularly in a democracy) is to legislate on what the people have voted on and adjust the constitution accordingly, but this didn’t happen. The government buried their heads in the sand and refused to act and refused to listen to the will of the people.

Nothing happened until 2002 when the government and Taoiseach Bertie Ahern (because of a promise made to his mother) decided to hold another referendum to remove the threat of suicide… Once again the people voted to retain the risk of suicide as a real and substantial risk and once again the government failed to do their duty and legislate.
In 2010 three women, know as A, B and C took a case against Ireland to the European Court of Human Rights. The Court ruled in the case of C that Ireland had violated article 8 of the European Convention of Human Rights… The ECHR recommended that Ireland would have to clarify whether and under which circumstances an abortion may be performed to save the life of a pregnant women…
How can we criticise processes in places like Russia, the Middle East, Zimbabwe etc., when we appear to be a democracy in name only, when our own government doesn’t respect our voices… This debate is not just about abortion, it is about respecting the democratic process that our country was once so proud of and making Ireland into a democracy that we can be proud of once again.

I’m sure people have written more that I’ve missed- do share any links you find, or pieces you’re written yourself, in the comments.

Signal boosting from Unlike Youth Defence, I trust women to decide their lives for themselves:

On Saturday January 19th, a group called ‘vigil for life’ are demonstrating at Merrion Square at 16.30. We’re asking that a number of our followers join us in a counter-demonstration close by.

These people (whether they realise it or not) are protesting against the introduction of legislation that would save the lives of women living in Ireland.

They’re protesting against legislation that the majority have voted for in a referendum.

They’re protesting directly against what the ECHR says Ireland needs to do to protect the human rights of pregnant women.

We intend to protest silently, without the use of chants or shouting, with signs and pictures of women who have been denied their right to life and health because of this country’s antiquated abortion laws. We have lives too, and its time our government stepped up to protect us.

Please join us in our silent counter-protest. Please bring a sign if you can (it’s as simple as asking a local shop for one of their cardboard stock boxes and using paints or markers) to help get our message across without the need to attempt to shout the other side down.

We will be meeting at Merrion Square South between 4.30 and 4.45. We ask that people coming from town to meet walk across Baggot St, up Lower Fitzwilliam Street and over Merrion Square South (see map below). We ask that people not walk via Merrion Street Upper and past the government buildings, as adversarial confrontation with the Vigil For Life is not our aim in this and they will likely be gathered there. At least one of our members will be waiting at the meeting place early with a large pro-choice sign, so look out for her!

*Image taken from flyposters in Smithfield, December 2012 which were created to highlight the restrictive abortion laws which force women in Ireland to travel abroad while suffering in silence for fear of stigmatisation

A woman holds a placard saying “Why in the 21st Century are people still PISSING THEMSELVES over abortion on demand? What’s so scary about women being FULLY autonomous?”